Looking back on a 35-year history, we recount the story of how the industrial robot business was successfully developed.

In December 1981, Yamaha Motor Company accepted the challenge of a new market — industrial robots. The IM division was set up with the intention that the CAME (Computer Aided Manufacturing Equipment) that had been developed for the motorcycle production lines could be sold outside of the company as well.

Most of the founding members of the IM division were engineers associated with the robot group of the production technology department, but top-flight engineers from outside the company were also recruited, bringing the total to about fifty. It was a boldly confident start.

At the time, it was taken for granted that industrial robots meant the large welding robots such as used on automobile production lines. In such a context, Yamaha’s own CAME robots, which were small, highly functional, and elegantly designed, had been featured on the cover of specialized publications and had become a topic of conversation in the industry. However, the day came suddenly only eight months later. 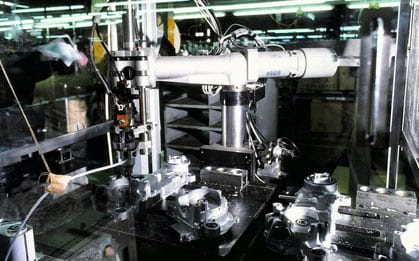 “The IM division is going to be dissolved.” The gathered members were shocked by the managing director’s unexpected words. In August 1982, the curtain came down on the first incarnation of the IM division.

One reason for the dissolution was the damage caused by the fierce struggle for Japanese domestic market share, commonly called the “HY war.” In addition, the market was slow to acknowledge the performance and cost-effectiveness of these products, and the fact that the products were not selling was also a fatal factor. Thus, the IM division disappeared from the front stage. All that remained in the production technology department were eight previous IM members. However, if only to reassure themselves of their own existence, these people did not merely sit idly twiddling their thumbs.

Just about that time, Katsuhiko Tsuchiya returned to Japan following the conclusion of his term of service as the head of the California R&D center, and took up his new post as the chief of the technical department’s technical section. Immediately after his return to Japan, Tsuchiya was looking for a promising new endeavor within the company. That’s when he was approached by former IM members with an earnest request: “Let’s find a way to continue the robot business.” 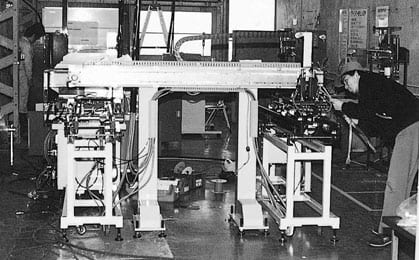 “Yamaha already has the technology on which robots are based. It would be a pity to simply abandon the field.” Tsuchiya’s decision and the zeal of the former IM members fused, and a “new” IM technology section was born within the production technology department. It was based on the second floor of Hamakita factory building number 2, quietly taking up modest quarters as a dependent in one corner of the west side occupied by the MC department.

The mere existence of a position did not mean that people could now relax. There was a continual tension engendered by the understanding that “If we don’t continue showing a profit, we can’t complain when they dissolve us.” Feeling themselves to be at the brink, and heedless of appearance, the IM members came to work on holidays and accumulated mountains of overtime. To take a generous view, they were enthusiastic about their work, but measured by the standard of being company employees, they were working at their own convenience. The IM section became mockingly known as the “always problems” (Japanese: Itsumo Mondai) section.

However, they were helped by the benign atmosphere of the factory which generally looked with tolerance on this bunch of problem children, and however recklessly, IM began to grow. 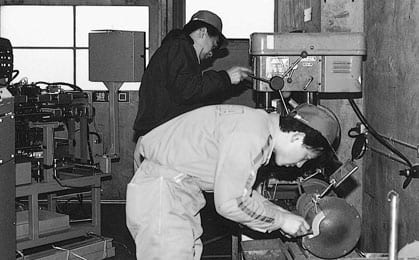 For their real debut, the reborn IM chose an exhibition called the “Tokyo International Robot Exhibition.” The exhibition was to be held in September 1983. This meant that they had only two months in which to get ready after restarting as the IM technology section. Working overtime every day until the day before the event, they assembled a collection of any “robot-like things” they had. At the exhibition site, the team members putting together the system worked late into the night to the amazement of the security personnel making their rounds.

Naturally, none of the IM members had any experience managing an exhibition. All of the explanatory boards and pamphlets at the booth were hand-made. The explanations of the equipment were all presented by the members themselves. Although the style was unsophisticated in comparison to other booths with their promotional models, every member burned with unbeatable zeal and energy.

Although not a single reservation was received during the Tokyo International Robot Exhibition, a certain manufacturer later called to say that they had seen the IM booth at the exhibition, and that they were interested. They asked us whether, using the robot technology that we had exhibited, we could make a small chip mounter. A “small chip mounter” (today’s surface mounter) is a machine that automatically attaches electronic components to the surface of a printed circuit board. At present, by the way, surface mounters are the principal profit-center of IM. This one phone call dramatically changed the fate of IM.

Subsequently, IM products continued to be aggressively shown at exhibitions. Even though the robots of Yamaha Motor Corporation were not yet known by all, the name of the company was widely familiar. Opportunities for business deals at the exhibition booth became more frequent. Finally, large orders began to come in, such as an assembly line for brakes and a photocopier manufacturing system.

Linking up with global leaders

The demand for Yamaha’s surface grew in tandem with the expansion of the printed circuit market. For the new IM which had launched as a small rowboat battling strong counterwinds, more favorable breezes now began to gather. Then in February 1988, an official contract was signed to provide surface mounters to a leading global manufacturer of electronics. This success was a major impetus to the further development of the IM business. It allowed the creation of products that could catch up with the European and US markets, and further gave the members of IM an international sense and the technical ability to meet high-level requirements for performance, functionality, and product quality.

Formerly considered a problem child, the IM business has continued to grow, and is now praised as a “model student.” 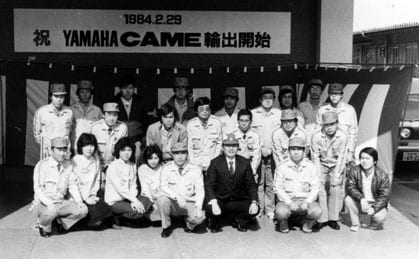 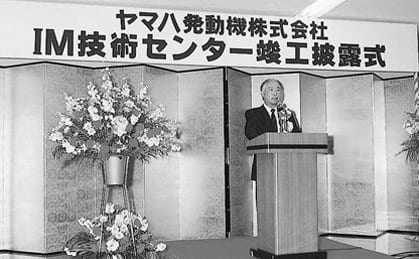