Success in manufacturing is a moving target. Planners routinely face demands to reduce cycle time, increase capacity, introduce new products more quickly, and utilise available floorspace efficiently. The methods employed to move workpieces between the various production processes can significantly influence the extent to which these goals are achieved.

1.Scale Production When Factory Floorspace is Full
Sometimes, rotary indexing tables are used to move workpieces from one machine to the next, quickly, to perform a sequence of assembly processes. When designing and setting up an assembly sequence to be performed using indexing tables, process engineers must consider critical indexing table parameters such as resolution, repeatability, accuracy, and allowable backlash and hysteresis.
If throughput needs to be increased, it may be possible simply to increase the rotational speed as the table moves between index positions. If an extra machine needs to be added to the sequence, installed either around the perimeter of the table or in the centre, this can be a complex task. Equipment currently in place must usually be moved to a new position to accommodate the extra machine. Scalability is limited, however, by the circumference of the table. Adding an extra machine may be physically impossible. When the limits of speed and table size have been reached, the only alternative may be to add an extra indexing table. This can demand significant extra space, which may not be available.

2. Find More Ways to Cut Line Cycle Time
When moving workpieces from process to process along a production line, conventional belt-and-roller conveyors are often the transport of choice. These are equally suited to carrying workpieces between automated machinery or hand-assembly stations (figure 1). 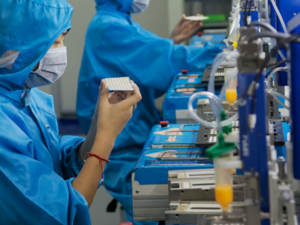 Typically the conveyor speed is fixed and movement is unidirectional. To cut the cycle time and thus raise production line throughput, the obvious course of action may be simply to increase the conveyor speed. This is not always successful and, in fact, can be counterproductive in some situations. The issue comes when stopping the moving workpieces, which is typically done with a mechanism such as a micro-switch or end stop that brings the conveyor to an abrupt stop. Some companies have found that workpieces have become displaced and carrier trays or pallets damaged. Stopping work to remedy these issues reduces productivity.

3. Save Cost and Space with Process Sharing
When working out how to automate the assembly of a new product, some processes – such as driving screws, applying adhesive, or installing a multi-part bezel – may need to be performed more than once on the same workpiece. To complete the processes in a traditional unidirectional sequence, the same type of machine would need to be installed at several places along the assembly line. Both space and capital budget could be saved if a workpiece could be returned to, say, a screwdriving machine to install a second set of screws immediately after a process that positions an outer cover or enclosure. However, moving workpieces backwards along the production line to achieve this is not easy to arrange using conventional conveyors.

4. Streamline Workpiece Handling
Another aspect of the traditional conveyor that can slow production and hinder attempts to increase productivity is the fact that workpieces must usually be removed from the belt and placed in a holder such as a tray, chuck, or vice before any process can be performed. This could be done by hand or by an automated pick-and-place mechanism. The workpiece must subsequently be returned to the conveyor to move to the next process. Arranging this sequence of pick, place, and replace actions adds to the cost of process automation as well as the line cycle time. One advantage of indexing tables is that this is usually not necessary. However, indexing tables can be subject to the limitations already described. 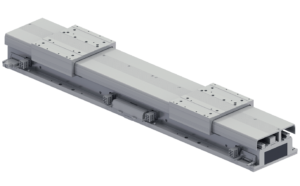 The company’s technicians found that linear conveyor modules allowed for the number of processes involved in a production sequence to be increased more easily than indexing tables typically allow, by adding extra modules. On the other hand, the team was also able to utilise the available factory floorspace more efficiently. In addition, they were able to define the workpiece stop positions accurately, and fine-tune the positions easily by reprogramming the conveyor modules. The module sliders are individually controlled by the Yamaha YHX universal controller, which has 64 output channels.

Using the linear modules, this company was able to setup its new production facility, incorporating additional processes as part of a more complex assembly sequence, in about half the time needed to reorganise a simple sequence performed on an indexing table.

Yamaha’s linear conveyor modules have enabled manufacturers building high-value products such as smartphone handsets to cut cycle time in response to customer demands and increase efficiency by eliminating line stoppages to fix problems such as broken pallets and displaced workpieces. Introducing new products, or reconfiguring and scaling the line to build new products and increase capacity, has also become faster. The modular design allows the line layout to be changed quickly and easily and all slider stop positions can be reprogrammed as needed.

LCMR200 modules are available in various standard lengths from 200mm to 1000mm and the slider speed is adjustable up to a maximum of 2500mm per second, for payloads below 10kg. The maximum acceleration is 1.3g, equivalent to a 0-100kph time under 2.2 seconds, giving great scope to reduce the time for workpieces to move between processes when seeking to reduce cycle time.

Leverage Flexibility for Process Sharing
Moreover, by enabling bidirectional movement, linear conveyor modules give the flexibility to move workpieces forwards as well as backwards between processes in the line. This creates the opportunity to handle duplicated processes using a single workstation – such as the two-stage screwdriving case, mentioned earlier – without interfering with other inline equipment upstream or downstream (figure 3). The capital cost and footprint of the line can thus be optimised to suit the available budget and factory floorspace.

Figure 3. Sliders can move in either direction between workstations to save duplication.

The YHX controller centralises control of the conveyor sliders and other factory automation devices such as SCARA and cartesian robots and their peripherals, and so enables users to setup a complete automated assembly cell quickly and easily. The YHX Studio tool simplifies programming with ladder graphics or text entry, helping to visualize the cell as a complete entity and so optimise all interactions between robots and conveyor sliders.

Cut Transfer Times by 50%
Linear conveyor modules like Yamaha’s LCMR200 series are built with high-rigidity guides that provide the stability needed for assembly processes to be performed directly on the carriage without removing the workpiece from the module (figure 4). 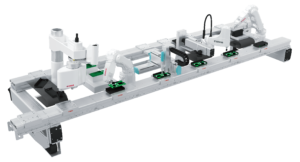 The LCMR200 provides accurate and repeatable control of the workpiece position and the covered design prevents foreign objects such as process waste entering the module. Performing processes while parts are on the carriage saves the time to design automated equipment for unloading and reloading workpieces from the conveyor, as well as the cost of the equipment and factory floorspace. The impact on cycle time, as workpieces are unloaded for processing and subsequently transferred back onto the conveyor, is also eliminated.

Yamaha Motor FA Section offers a unified range of solutions for robotic assembly, including single-axis robots, SCARA, cartesian, and articulated robots. Innovations such as the LCMR200 linear conveyor module; a smoother, space-saving and more versatile successor to conventional belt and roller conveyors continue to set the pace in factory automation. Core robotic technologies as well as key components and complete robot systems are all produced in-house, ensuring consistent quality and control over lead-times.