How to Design Conveyor Systems for Flexibility and Continuous Improvement

In manufacturing, standing still brings the certainty of being overtaken. Factories need flexibility that lets them keep increasing productivity and introduce new or upgraded products.

Manufacturers must always adapt to increase productivity and production output, ideally with minimal disruption to operations. Some approaches, like upgrading machinery or adding an extra production line, are usually only possible at infrequent intervals. In between such major investments, improvements to process settings and practices such as changeover procedures are needed to raise efficiency.

Driving Continuous Improvement
To increase output, an automotive parts manufacturer, based in Japan, tried to reduce the cycle time for critical processes while also increasing the conveyor speed to minimise the time each workpiece spent moving between processes. The production team at this company found that increasing the speed beyond a certain level delivered diminishing returns. When fast-moving items are stopped using a conventional pneumatic stopper cylinder, a significant settling time is needed before the workpiece can be retrieved from the conveyor and loaded into the process. They also found that increasing the speed of the process machinery to achieve a faster cycle time began to cause more frequent line stoppages to fix equipment errors.
Another manufacturer, producing small electric motors, sought to build orders for small runs of specific product variants more efficiently by reducing the line changeover time. Optimising the changeover procedures allowed them to reduce this time by 50%, from 10 minutes to 5 minutes. However, the cumulative effect of those 5-minute changeovers, typically completed several times each day, would equate to about 16 hours’ lost production every month. Hence the team needed to manage production carefully, prioritising the products built in the highest volume, to optimise productivity.
To save those lost hours, the company tried to devise a special tooling jig to produce multiple product variants without reconfiguring the line. This custom jig, designed to hold three different components in small, medium, and large sizes, enabled the line to handle up to nine different product variants without needing to be changed. However, the two-axis robot they were using to remove the selected piece from the appropriate position in the jig would require the conveyor stop position to be changed depending on the product variant being built (figure 1). Alternatively, replacing the two-axis robot with a three-axis type would allow the robot to move along the jig to pick the desired piece. Either approach would incur extra expense and trade away some of the desired savings in production time.

Conveyor System Design and Support
As the main artery running through the production line, an intelligently designed conveyor system can help maximise production output, avoid manual handling, and ensure best utilisation of factory space. Configuring a conveyor system to optimise the operation of a facility is a skill that often involves customising standard off-the-shelf units or conceiving individual solutions to specific challenges that exist within the factory environment, such as extreme space limitations or elevation changes. Buffer units are often required to accommodate differences in the capabilities of machines in the line and enable the entire line to operate in a coherent, coordinated fashion. Conveyor vendors have a large variety of different options and configurations and even special proprietary products that they can tailor to fulfil customers’ individual needs.
Because the system is usually designed by specialists according to a brief, the result is well adapted to the factory’s needs as expressed at the beginning of the project. As those needs change and evolve, making corresponding adaptations to the conveyor system can be difficult. Changing stop positions implemented with pneumatic cylinders and their associated sensors and solenoid valves, for example, can involve extensive software development, wiring, and mechanical adjustment.
The two companies manufacturing automotive parts and small motors both encountered such limitations when attempting to increase production performance using conventional conveyors. In each case, the project team was unable to achieve 100 percent of the desired improvement.

Workpiece Transport with Linear Modules
Compared to conventional conveyors, Yamaha’s LCMR200 linear conveyor module allows much greater flexibility to adapt and improve line performance. Parameters such as acceleration, deceleration, speed, and stop positions are set electronically and easily adjusted by writing the new desired values to the controller. In addition, the linear motor allows bidirectional movement.
The associated YHX controller eliminates writing ladder logic codes and allows the user to specify direct values and simple point-to-point moves. A single controller can coordinate multiple LCMR200 modules connected together as part of a complete production cell.
Because no additional sensors are needed to add extra stop positions, users can easily reconfigure their production line without compromising on reliability. The linear motor accelerates and stops quickly and smoothly and the settling time after reaching the desired position can be very short. In fact, the settling time can be optimised by adjusting the positioning tolerance: allowing for greater tolerance permits reduced settling time. Moreover, users can increase the conveyor speed without needing to insert extra buffering because each module can stop, restart, and reverse independently, as needed, to deliver each workpiece at the optimum time.
The LCMR200 slider can be programmed to stop in any desired location, with ±5µm (maximum) positional repeatability. On the other hand, the transfer speed is adjusted electronically up to 2500 mm/s. The table below compares typical times needed to transfer workpieces, according to the payload.

The slider can carry loads up to 15kg and the module’s rigidity permits processes to be performed without removing the workpiece from the slider (figure 2). This ensures a fast cycle time and also saves the engineering effort and cost to develop a mechanism to transfer the workpiece to and from a separate jig for each process. 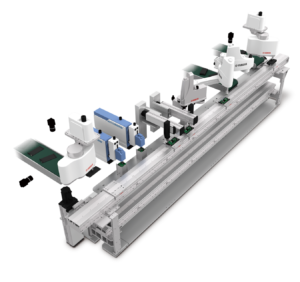 Figure 2. Linear conveyor modules present workpieces directly to each process in a sequence.

The automotive parts manufacturer mentioned earlier quickly saw how the LCMR200 could help achieve 100 percent of the desired improvement in productivity. As a pilot project, redesigning one production line to replace conventional conveyors with LCMR200 modules realised a substantial reduction of transfer time. This time saving, in turn, relieved pressure to shorten the cycle time of the various processes in the line. As a result the production volume has exceeded the team’s original target and the number of errors leading to stoppages has reduced to the point that this assembly line became regarded as a model line in the plant.
Similarly, the electric motor manufacturer used the LCMR200 to improve output by increasing the flexibility of the production line. The ability to change the module stop positions by reprogramming has saved a large amount of manual setup work. Subsequently, the team introduced a QR-code reader to identify each type of unit at the beginning of production to allow all the LCMR200 modules to reconfigure their settings automatically. This has now eliminated any need for human interaction with machines or equipment using the touch panel, resulting in full end-to-end automation of product assembly. This has increased the operating rate significantly and has eliminated operator intervention to changeover the product model. The company can now handle small production runs as efficiently as the largest orders.

Conclusion
Manufacturing businesses are constantly challenged to increase their productivity through measures such as raising the line speed and reducing changeover time. Conventional conveyors can be a barrier to progress, offering only limited flexibility that demands extensive engineering effort to reconfigure. Simple changes often cannot realise the improvements required. On the other hand, making major changes typically requires significant support from the vendor partner.
Bidirectional linear conveyor modules allow extensive reconfiguration of parameters such as speed and stop positions. Moreover, equipment owners can usually perform these changes independently. Additional benefits include the ability to perform processes such as mechanical assembly directly on the module, saving both process time and engineering overheads associated with removing and replacing the workpiece on a conventional conveyor.

Yamaha Motor FA Section offers a unified range of solutions for robotic assembly, including single-axis robots, SCARA, cartesian, and articulated robots. Innovations such as the LCMR200 linear conveyor module; a smoother, space-saving and more versatile successor to conventional belt and roller conveyors continue to set the pace in factory automation. Core robotic technologies as well as key components and complete robot systems are all produced in-house, ensuring consistent quality and control over lead-times.